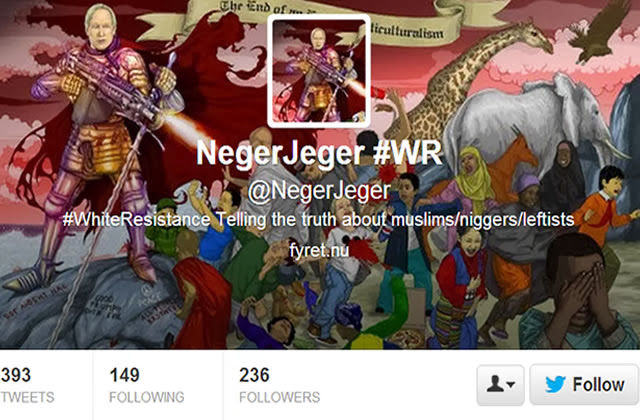 There will first be a forerunner to the Antichrist before the manifestation of the actual Antichrist as foretold by the Mother of God the Blessed Virgin Mary at La Salette:

Follower of Anders Behring Breivik Has made about 444 tweets since then. Most of the tweets are against blacks and Muslims and religion.

Muslim immigrants: Raping and killing white people all over the world. The media is silent. #racism — NegerJeger #WR (@NegerJeger) September 11, 2013

Is a supporter of the English Defense League:


@EDLMORONCATCHER Only a muslim/leftist could be as offended as you are by people who fight for freedom.
— NegerJeger #WR (@NegerJeger) September 18, 2013

Is a lover of the Golden Dawn:

So far the guy is a ethno-nationalist who hates religion and yet as is typical of these misguided nationalist like the EDL they are constantly using religious imagery such as the Crusader Cross that can be found on the masks of the EDL: 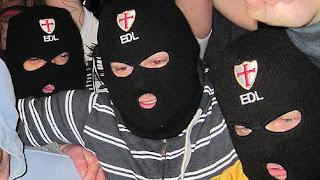 The crusaders were Roman Catholic, they were not godless nationalists like we have today. The crusaders fought for the Holy Land - it was a religious cause. Interesting to see the mind set of this defender of ABB - he believes that force on a personal level and not state level is the only solution to stop the flood of Muslims - meaning more Breiviks running amok killing off darkies.


I demand a holocaust of muslims and niggers, it's absolutely necessary
— NegerJeger #WR (@NegerJeger) October 13, 2013

Where is all this leading? Where will men like this nationalist find himself one day? On top a steep mountain lying in wait to kill the Fatima Pope and a bunch of Roman Catholics: