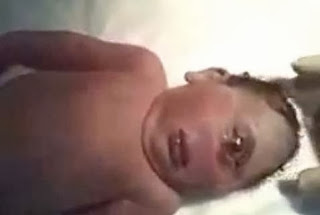 ... Allah is not one eyed while the false Messiah, Ad-Dajjal is blind in the right eye and his eye looks like a bulging out grape.

'Abdullah bin 'Umar: Allah's Apostle said. "While I was sleeping, I saw myself (in a dream) performing Tawaf around the Ka'ba. Behold, I saw a reddish-white man with lank hair, and water was dropping from his head. I asked, "Who is this?' They replied, 'The son of Mary.' Then I turned my face to see another man with a huge body, red complexion and curly hair and blind in one eye. His eye looked like a protruding out grape. They said (to me), he is Ad-Dajjal." The Prophet added, "The man he resembled most is Ibn Qatan, a man from the tribe of Khuza'a."

Video posted on Internet of the cyclops baby has since been taken down.