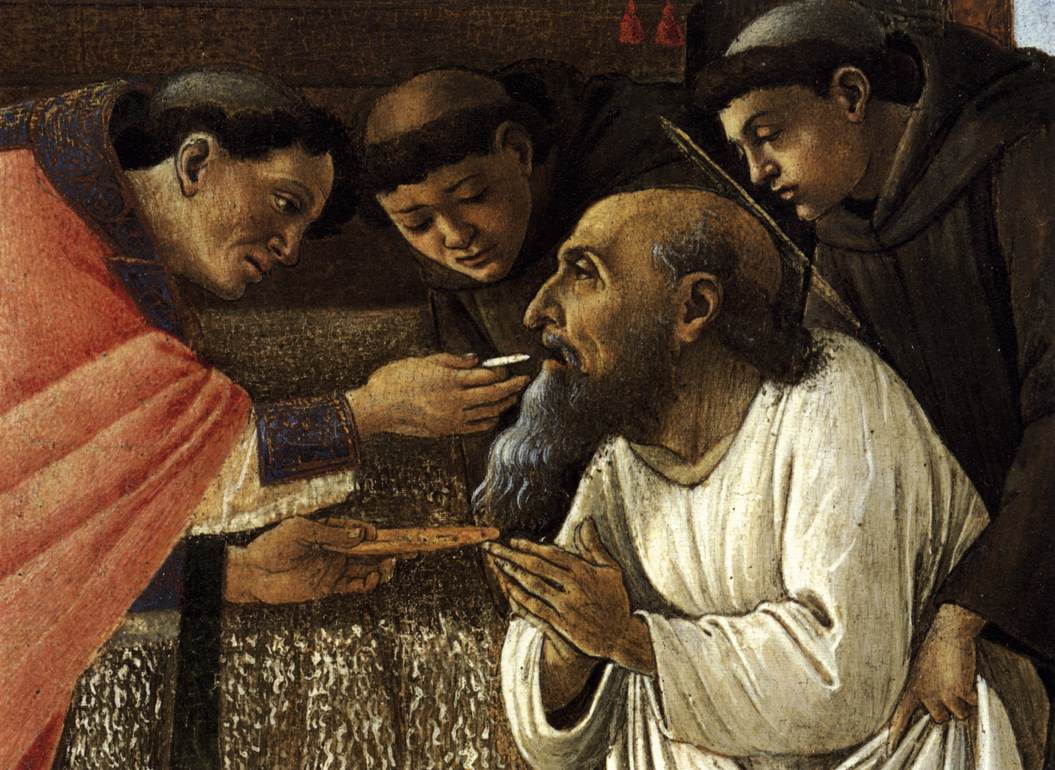 BOTTICELLI, Sandro
The Last Communion of St Jerome (detail)
c. 1495
For behold, the days shall come, wherein they will say: Blessed are the barren, and the wombs that have not borne, and the paps that have not given suck. Then shall they begin to say to the mountains: Fall upon us; and to the hills: Cover us.  [Luke 23:29]
hu·bris excessive pride or self-confidence.

Did St Jerome lift weights and admire his manly man physique in the mirror like most FSSPers do?

There will be 35 years worth of Chastisements starting when the TWO Popes are dead.

Did you know that every day you die - every day is one day closer to your death. FSSP Rad Trads lifting weights don't understand that their body is decaying every day and every moment of the day. And one day you will be dust. Lifting weights is not going to change the fact that your body decays everyday.

Do you think that a glorified body at the Resurrection depends on how much you were able to bench press when you were alive?

Do you really think that a St. Jerome lifted weights? Pumped Iron?

This obsession with your manly physique and your confidence in many children is folly.

Folly, and you will soon see for yourselves that this is/was folly.

Remember FSSP Rad Trad Steve Skojec? He lost his faith before the start of this  35+ years worth of Chastisements? And Steve thought he was going to lead the way in restoring the Church! Remember that?

Steve's hubris cost him his faith. He was punished for his pride and lost his faith. This is what is going to happen to the majority of FSSPers and their children.

It was made mention in a Tweet by SSPXer Boss that Nick Fuentes... "just never had his ass kicked. Clearly he needs to."

Hey Boss what is going to happen to you during 35+ years worth of Chastisements? Are you going to get your ass kicked?

Oh because you lift weights and have many children. LOL!

Again Jesus said: For behold, the days shall come, wherein they will say: Blessed are the barren, and the wombs that have not borne, and the paps that have not given suck. Then shall they begin to say to the mountains: Fall upon us; and to the hills: Cover us.......

Yes during the coming 35+ years worth of Chastisements you will say Blessed are the barren....

This twerp is talking about how he’s a real man in relation to a conversation he had with his mother. Keep trying sport, let me know when you can bench your body weight. https://t.co/U1gVIokdg8


funniest comment is: "he has no self awareness" says the manly man who admires his manly man physique in the mirror while pumping iron down at the gym 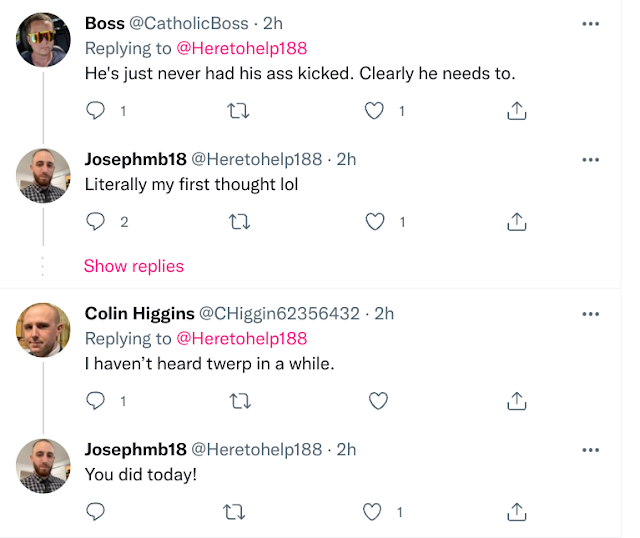