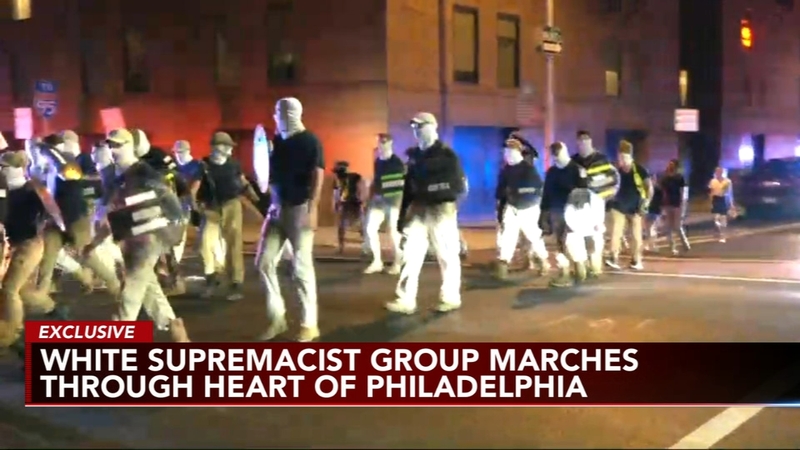 “A forerunner of the Antichrist, with his troops gathered from several nations, will fight against the true Christ, the only Saviour of the world. He will shed much blood and will want to annihilate the worship of God to make himself be looked upon as a God. Our Lady of La Salette 19 Sept. 1846 (Published by Mélanie 1879)
White supremacist group marches through Philadelphia before Fourth of July celebrations
PHILADELPHIA (WPVI) -- Police say scores of members of a group described by the Anti-Defamation League as white supremacist marched in Philadelphia over the weekend, clashing with pedestrians and setting off what were believed to be smoke bombs at one point. The group of Patriot Front members, estimated at 150 to 200 people, marched for several blocks in Center City on Saturday evening wearing tan pants and black shirts with face coverings and carrying shields and flags. Police said they were chanting slogans such as "Reclaim America" and "The election was stolen."

Police said pedestrians "engaged members of the group verbally" and there were several physical encounters. Finally, someone from the group used what police believe were smoke bombs "to cover their retreat as they fled," police said. Police said no one in the group was from Philadelphia. The group is based in Texas and traveled into the city. Action News was the only crew on the scene as the group marched down the Ben Franklin Parkway, across Market, Chestnut and Walnut streets before arriving at Penn's Landing.
Police said pedestrians "engaged members of the group verbally" and there were several physical encounters. Several onlookers began yelling at the group and banged on trucks as they loaded into their vehicles and drove off. Police said some of the angry onlookers scared off the white supremacists. "They started engaging with citizens of Philadelphia, who were none too happy about what they were saying. These males felt threatened, and, at one point, somebody in their crowd threw a type of smoke bomb to cover their retreat, and they literally ran away from the people of Philadelphia," said Philadelphia Police Officer Michael Crum.
Police later questioned the entire radical group after pulling their trucks over for safety reasons along Delaware Avenue. Police didn't announce any arrests and said there were no reports of any damage or injuries during the march, which came on the eve of Jill Biden's visit to the city for Independence Day festivities. The Anti-Defamation League calls the Texas-based group "a white supremacist group" that "espouses racism, anti-Semitism and intolerance under the guise of preserving the 'ethnic and cultural origins' of their European ancestors." It also says the group "participates in localized 'flash mobs' and torch marches/demonstrations." Source
Website: PATRIOT FRONT