Party Of One! The Forerunner To The Antichrist Fails To Form Political Party! 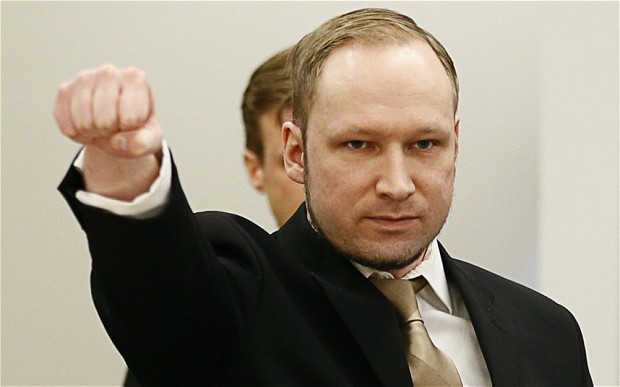 "To be an association, you need to have two people or more ... and in this case, there's only Breivik," Mette Siri Broenmo Norwegian Entity Registry.

“J.M.J.
The third part of the secret revealed at the Cova da Iria-Fatima, on 13 July 1917.
I write in obedience to you, my God, who command me to do so through his Excellency the Bishop of Leiria and through your Most Holy Mother and mine.
After the two parts which I have already explained, at the left of Our Lady and a little above, we saw an Angel with a flaming sword in his left hand; flashing, it gave out flames that looked as though they would set the world on fire; but they died out in contact with the splendour that Our Lady radiated towards him from her right hand: pointing to the earth with his right hand, the Angel cried out in a loud voice: ‘Penance, Penance, Penance!'. And we saw in an immense light that is God: ‘something similar to how people appear in a mirror when they pass in front of it' a Bishop dressed in White ‘we had the impression that it was the Holy Father'. Other Bishops, Priests, men and women Religious going up a steep mountain, at the top of which there was a big Cross of rough-hewn trunks as of a cork-tree with the bark; before reaching there the Holy Father passed through a big city half in ruins and half trembling with halting step, afflicted with pain and sorrow, he prayed for the souls of the corpses he met on his way; having reached the top of the mountain, on his knees at the foot of the big Cross he was killed by a group of soldiers who fired bullets and arrows at him, and in the same way there died one after another the other Bishops, Priests, men and women Religious, and various lay people of different ranks and positions. Beneath the two arms of the Cross there were two Angels each with a crystal aspersorium in his hand, in which they gathered up the blood of the Martyrs and with it sprinkled the souls that were making their way to God.


Dante had a vision of the Fatima Pope and the forerunner to the Antichrist that is to kill the Fatima Pope - it's found in the above lines of canto xxxiii inferno.
If you know the mind of Dante better than I do then you need to correct me.

However Our Lady at La Salette said that one day a forerunner to the Antichrist would rise up first well before the manifestation of the actual Antichrist (see above).

Well the disappointing fact is that none of you will speculate on who the forerunner to the Antichrist is - no, the lot of you make ridiculous claims that Obama is the actual Antichrist etc...why do the lot of you believe in such things? Again you would rather remove yourself far from reality that is fast approaching.

So I will help you by stating again that the best possible candidate to fill the shoes of the forerunner to the Antichrist is Anders Behring Breivik or ABB.

ABB is the best candidate so far. ABB is to remain in jail for about twenty years - most likely the time he spends in jail will be enough time to raise his army and to make a false conversion to the Roman Catholic Faith - a conversion done with the help of a traditional Bishop who holds the same nationalistic beliefs as ABB.

Already ABB has sown his seed in prison by trying to form a political party his aim is to form a "democratic fascist seizure of power in Norway" - he didn't get permission, but he was still allowed to apply - ABB just needs a few followers - which he should get soon enough.

Already Fr. Gruner and Fr Kramer and the writers of the Remnant and Catholic Family News have formed and alliance with Nationalists from Italy - the Forza Nuova & Lega Nord. Why? Why? Please figure that one out and let me know the reason behind such foolishness. The foolish alliance should gain strength after the Fatima conference in September. I bet none you Traditionalists call Fr Gruner out on this nonsense of forming an alliance with Nationalists. Most of you, if not all, will remain silent.

So watch for a smooth conference in September ('cept maybe for an Islamic terrorist attack) where everyone is happy with the alliance made with Nationalists and the bonds that are strengthen.

Yea, the hour cometh, that whosoever killeth you, will think that he doth a service to God.