The Cult Of Anders Behring Breivik: A Forerunner Of The Antichrist, With His Troops Drawn From Many Nations, Will Wage War Against The True Christ 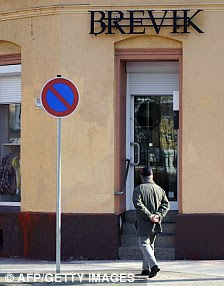 
Hundreds of 'love' letters have been sent from all over the world to the Norway Monster - a play is made about ABB - now a clothing store is using the killers name. Cult of personality is developing around ABB. This blog is the first and only blog trying its best to identify the forerunner to the Antichrist that Our Lady of La Salette said would appear some day. Many Roman Catholic Traditionalists do not believe the words of Our Lady at La Salette and many mock Mélanie, many do not believe that a forerunner to the Antichrist will ever appear - it is too fantastic to believe. Most of these traditionalists had no problem calling Obama the Antichrist - in effect agreeing with protestant fundamentalists. But to call ABB the forerunner to the Antichrist or possible candidate is too much for many. Why pick on the guy? ABB is just a killer and no more - most will say.

The problem of course in identifying Our Lady's forerunner to the Antichrist is that it is too uncomfortable to think about many would rather go about their own business and not wonder about such matters - it disturbs their life goals - if ABB is the one then in a few short years all hell will break loose and disrupt the lives of many - this is why no one wants to think upon such things. Well too bad. Someone is the forerunner to the Antichrist and he will commit terrible crimes someday - he will kill the Fatima Pope - so it is important to reflect on these things, of course,  a reasonable reflection. So if I am right about ABB as the forerunner to the Antichrist then I would expect more news on his cult of personality. It will get a little crazy.