New Catholic At Rorate Caeli: Why, Why Do The Great Of This World Allow This?...Because The Holy Roman Emperor No Longer Rules...He Has Been Taken Out Of The Way....

New Catholic at Rorate Caeli wants to know why ISIS is allowed to destroy at will, by the powers that be:

The Mystery of ISIS

The Great Powers that can destroy a nation in days apparently have not ended their strange experiment of letting the "Islamic State" do whatever they want in most of Syria and half of Iraq.

After the genocide of Christians from the lands occupied by ISIS, they will not stop until every sign of Christian heritage is wiped out. Why, why do the Great of this world allow this?

The answer was posted by New Catholic:

"The mystery of iniquity already worketh; only that he who now holdeth, do hold, until he be taken out of the way."... (II Thess.)

All Church Fathers 'cept one are in agreement that when the visible authority of the Roman Emperor once Pagan now Roman Catholic no longer rules the world as has been called to do so by the Blessed Trinity, the mystery of iniquity will be given free reign to destroy all that is Holy. The mystery of iniquity is lead by the Antichrist and his forerunners and is free at will to destroy Christendom.

Granted the Antichrist has not manifested himself as yet, nor will he until the forerunner of the Antichrist makes his appearance first - which is soon on the horizon. This Maozim or Forerunner will raise an army made up men taken from many nations and will put to death the Fatima Pope and faithful. When will this take place? Don't know. Just have to watch the mystery of iniquity do its destructive work to get an idea of when Maozim will make an appearance.

Maybe New Catholic already knows this about the Catholic Doctrine of he who now holdeth, do hold, until he be taken out of the way is the visible authority of the Roman Emperor.

And maybe other Roman Catholics are waking up to the reality that there is a urgent need for a true world political authority to reemerge on the world scene, As Pope Benedict tried to tell us before he was ousted from the Chair of Peter.

If so God Bless New Catholic 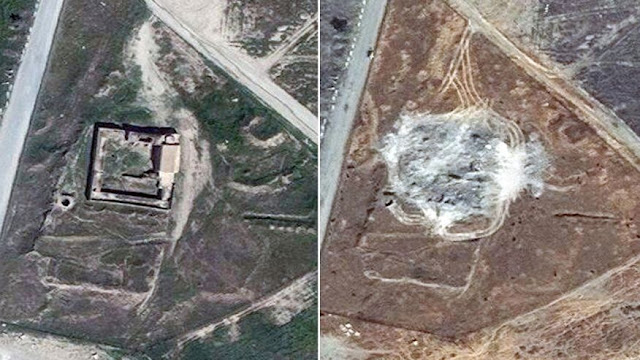 This Destruction Occurred When The Roman Emperor Has Been Taken Out Of The Way
St. Elias Monastery Destroyed By Muslims