NEW BOOK: The Man Behind The Curtain: Michael Voris And The Homosexual Vortex Kindle Edition by E. Michael Jones 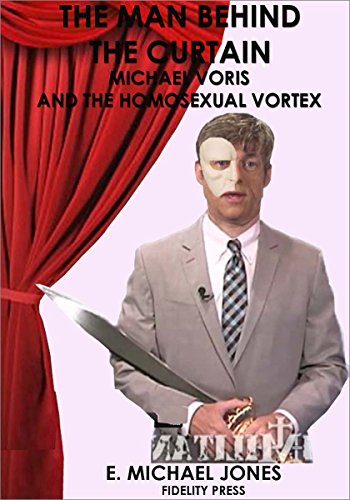 The Man Behind the Curtain: Michael Voris and the Homosexual Vortex Kindle Edition
In April 2016 Michael Voris's homosexual past finally caught up with him. The crusading on-camera face of Church Militant TV who had been the scourge of homosexuals in the Catholic Church turned out to be a homosexual himself and tried to bring closure to the scandal by outing himself. But even if damage control brought about a quick fix, many questions remained unanswered. The Man Behind the Curtain addresses all of those questions.

“Nothing is more dangerous for beginners in the spiritual life, than to wish to play the master, and to guide and convert others.” St. Philip Neri
“Beginners should look after their own conversion and be humble, lest they should fancy they had done some great thing, and so should fall into pride.” St. Philip Neri
Excerpt
The Catholic Catechism claims that: During the first centuries, the reconciliation of Christians who had committed particularly grave sins after Baptism (for example, idolatry, murder, adultery) was tied to a rigorous discipline, according to which penitents had to do public penance for their sins, often for years before receiving reconciliation.[ 49] The Catechism of the Council of Trent goes into greater detail when it cites St. Bernard, who: observes that sin produces two effects: a stain on the soul and a wound; that the stain is removed through the mercy of God, while to heal the wound inflicted by sin the remedy of penance is most necessary. When a wound has been healed, some scars remain which demand attention; likewise, with regard to the soul, after the guilt of sin is forgiven, some of its effects remain, from which the soul requires to be cleansed.[ 50] St. John Chrysostom makes the same point when he claims: It is not enough that the arrow has been extracted from the body; the wound which it inflicted must also be healed. So with regard to the soul, it is not enough that sin has been pardoned; the wound which it has left must also be healed by penance. E. Michael Jones