Ever Notice That Face Mask Wearing Forerunner To The Antichrist Alexander Tschugguel Looks A Lot Like The Batman Villain - Bane? 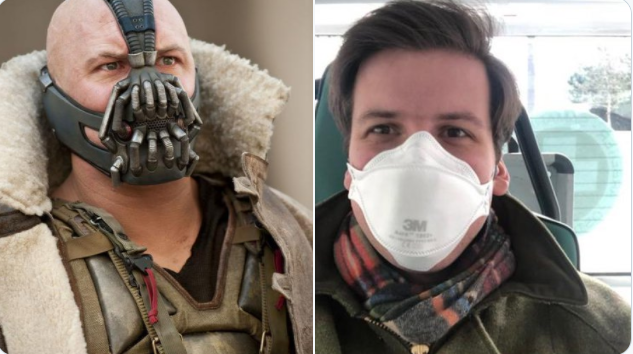 Ladies and gentlemen, we live at a time of great deception, and those who appear to be good and pious on the outside always have the potential to do the greatest damage: “And no wonder: for Satan himself transformeth himself into an angel of light” (2 Cor 11:14). The comments and observations that follow will irritate some people. We would like to preface them by making clear that we are not trying to cast undue suspicion on Mr. Tschugguel or to find fault with him. However, he is a public figure, and recent developments make it necessary to raise some questions in order to prevent people from being potentially misled by this rising star of the (perhaps sincere but) false opposition.

Yesterday, on Mar. 22, 2020, Alexander Tschugguel released another message from the hospital, and this is where things begin to get curious. Note in particular the underlined portions: 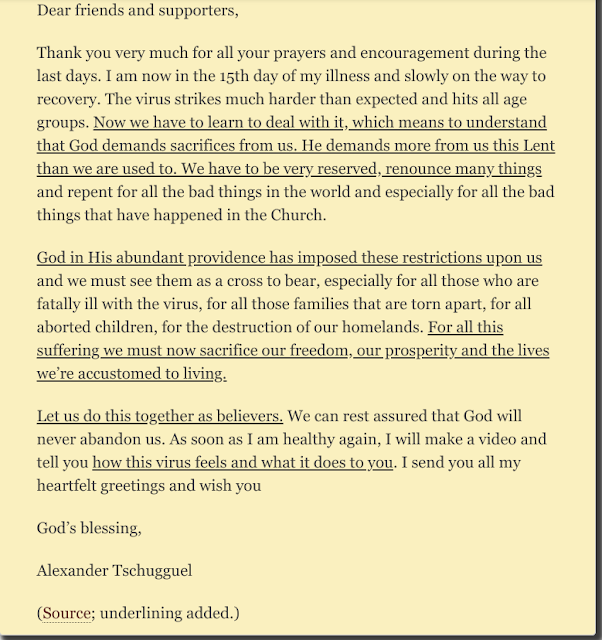 This message is odd for several reasons.

The first noticeable oddity is the tone. Tschugguel speaks like a shepherd instructing his flock. He doesn’t qualify or relativize his statements with typical phrases like “I think”, “I believe”, “apparently”, “in my experience”, or “in my opinion,” as most people would do. Rather, he makes strong, unqualified declarations (see below for commentary).

Secondly, Tschugguel’s assertions are entirely submissive towards the situation. He does not mention that we ought to work to defeat the pandemic, that the problems resulting from it need to be resolved, or that we should beg God to spare us. Instead, he is entirely resigned to accepting this virus as ushering in a new paradigm of life, apparently unaware of the dangers such an attitude may bring.

Now let’s look a bit more closely at some of what he wrote:

“The virus strikes much harder than expected….” — Notice that Tschugguel doesn’t simply say it struck him harder than he expected; rather, he makes a universal and objective claim about the virus and its expectations, as though everyone were equally affected by it. Yet we know that for many people there are few or relatively mild symptoms only.

“Now we have to learn to deal with it, which means to understand that God demands sacrifices from us.” — It is certainly a dogmatic truth that God requires us to make sacrifices (see Mt 16:24), and a Catholic can obviously affirm that; but Tschugguel here suggests that the only way to respond to the current Coronavirus pandemic is for us all to give up what we’re used to having. He makes this clearer in the subsequent sentences.

“He demands more from us this Lent than we are used to. We have to be very reserved, renounce many things….” — This is a clear example of Tschugguel acting like an instructor teaching his students. He interprets for us all what God requires of us in this particular situation. This is what a father might tell his children, or a bishop his flock, but it is odd and presumptuous for a simple layman to speak this way to people he does not know and over whose charge he has not been placed. He seems to be speaking as though he had authority over those he addresses.

“God in His abundant providence has imposed these restrictions upon us….” — It is true that everything that happens takes place with at least the permissive will of God and within His providence (cf. Mt 6:26), and in that sense one can say that “God … has imposed these restrictions upon us”. At the same time, Catholics are not called to be apathetic defeatists. Challenges are to be met, problems confronted and solved, difficulties overcome — and only when this is not possible are we to accept the status quo as given and willed by God. Constancy, persistence, patience are virtues, after all. But strangely enough, Tschugguel says nothing about how we must fight this virus, how we should pray for deliverance, work to be freed from restrictions, etc. His words are only about accepting the situation as a given and as willed by God, without any kind of resistance. He implies, in other words, that this situation is unchangeable. But why?

“For all this suffering we must now sacrifice our freedom, our prosperity and the lives we’re accustomed to living.” — This is the most troubling portion of the entire message. Tschugguel declares, almost as though he had been given direct instructions from God Himself, that “we must now sacrifice our freedom”. It sounds a bit like the days after Sep. 11, 2001, when certain powers told us what “had to be” done, for our own good. What freedom does Tschugguel have in mind, specifically? Does he mean all freedom across the board? The freedom to move about freely and assemble? Or the freedom to practice Catholicism, which has also been severely curtailed in many parts of the world? He doesn’t say, but he adds that “our prosperity” and “the lives we’re accustomed to living” must also be given up. Isn’t that, at the very least, a bit rash of a conclusion to draw? Why does someone who is just finishing a 5-day hospital stay with a severe respiratory condition bother to write a note in which he announces the things we had better willingly give up now? Why is he even bothering to instruct anyone at this time, rather than simply offer his gratitude for prayers and good wishes and exhorting people to persevere in grace? “

…I will make a video and tell you how this virus feels and what it does to you.” — Here again he makes an objective claim about the virus and its consequences. He could have said, “I will make a video and share my experience so you can see how this virus affected me and what it did to me“. Instead, he makes a general assertion about how, in effect, everyone experiences it and what it does to all people who have it. Again, this is unusual.

For all these reasons, Tschugguel’s message is quite troubling, especially when we consider all of them together.

Are we reading too much into this? Are we being too critical? This too is possible. But there is more weirdness to this whole thing still.

Today, Mar. 23, Tschugguel was released from the hospital. On Twitter he posted a photo of himself being transported back home. Take a good look at him and ask yourself if anything looks strange:

Does anything look strange to you? No?

That is the point. For a man who was stricken with a really serious Coronavirus for over two weeks and languished in the hospital for five days, he looks uncharacteristically good. In fact, were he not wearing the respiratory mask, you wouldn’t know anything was wrong. He looks as energetic and jaunty as ever.

And yet, in yesterday’s message, he told us that he is “slowly on the way to recovery” after 15 days and will make a video once he is “healthy again.” In a tweet of Mar. 21, he wrote: “My lungs are still very weak and the rest of the body is too.” In today’s tweet, in which is contained the above photo, he writes that he will “need a few days” still for full recovery.

Granted, at 26 years of age he is in the prime of life, and we’re not suggesting that it’s impossible for him to look this good after his Coronavirus ordeal. But some skepticism must be permitted here, especially considering that the message he released yesterday exhorted all to surrender their freedoms so as to adjust to a new way of life.

What is going on here?!

We do not presume to have the answer, but speculation cannot be forbidden. These matters — the holy Catholic Faith and the Coronavirus epidemic — are too serious and important for us to simply uncritically accept everything we find on the internet. A prudent skepticism about potential “fake news” is a good thing, after all, and if what is claimed really is true, no harm will be done by investigating it.

What is definitely going on is that Tschugguel is being promoted again and again by Life Site, which now casts him as a leader of Catholics. John-Henry Westen calls him “a leader in the Church Militant, and Dorothy Cummings McLean refers to him as “the highest-profile lay Catholic leader with the virus”. And now that “leader” is giving instructions, with Maike Hickson signaling her submission: “He now calls upon us to accept the sacrifices that come with the virus…”, she writes, sounding as though she were reporting on a papal exhortation. Something just doesn’t seem right about this.

We repeat: We do not mean to wrong Mr. Tschugguel, and we are not accusing him of anything. Maybe all of this has a fairly innocent explanation — that is not impossible. But considering that we must be “wise as serpents” (Mt 10:16), we would be remiss in necessary vigilance if we did not at least question things that look odd. “Take heed lest any man deceive you” (Mk 13:5).

The Forerunner to the Antichrist will imitate the actual Antichrist as much as possible.

Here from St Robert Bellarmine on the four heads of Antichrist Doctrine as translated by Fr. Michael Walpole: