Sermons On Antichrist For Advent: Who Is Antichrist, Or How Long Will Be His Dominion, According To The Opinion Of Certain Ancient Doctors? 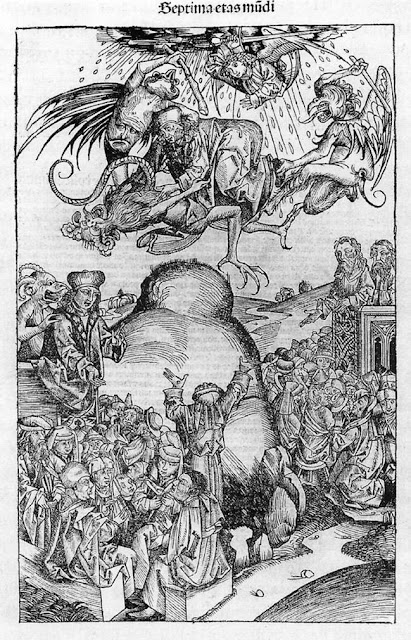 2. POINT.
Who is Antichrist, or how long will be his Dominion, according to the opinion of certain ancient Doctors?
OF Catholics you may find in Pererius upon the Apocalypse, divers (as Annius of viterb, Henthenius, Clitoueus, Prateolus , Genebrard) affirming or insinuating Mahomet to be Antichrist.
S. Hypolitus imagined that Antichrist will be begotten by the Devil upon a public harlot. S. Augustin relates of others thinking Nero to have been Antichrist. The common opinion de Ciuit.c.19. of ancient Doctors is, that Antichrist will be that abomination of desolation which Christ foretold should sit in the temple. In which opinion are S. Ireneus, Hierome, Hilarius, Ambrose, &c.
The ancient Doctors do also resolve, that he will be a Jew, and of the Tribe of Dan: for which cause they imagine that S. John numbed nor that Tribe among the residue Apoc. 7. Also, even by confession of  Whitaker, and Fox, they taught that he should be but one man, and not continue but three years and a half, The fathers for the most part taught, that Antichrist should be but one man. Almost all the holy and learned Interpreters d by a time, times, and half a time, understand only three years and a half.
So that I need not allege their citations, their consent being so openly acknowledged. To whom by decrees do consent certain of the less malicious Protestants, as Zanchius before named, that the rage of Antichrist will not surpass three years and a half. Marie, Fox (whom Forde, and Downham, follow) led by a willing spirit, sine voce tamen, yet without any speech, resolved to stretch these three years & a half to 294. years; notwithstanding all the Holy learned interpreters judged otherwise. But the express scriptures precisely & diversely specifying this time of Antichrist by three years and a half, by 42. months, and by 1260. days, we may lawfully distrust these Foxes, not only in such their name prefiguring Heretics (according to the exposition of S, Augustin, and S. Ambrose) but also in practice schematically departing from the acknowledged consenting opinion of the Fathers, how soever they impudently beare in hand some time universally to agree with their belief.
As for his being of the tribe of Dan, saith Luther: vulgata opinio est apud omnes firiptores Ecclefiafticos quod ex Tribu Dan Luth.ad c.49. venturus fit Antichrijtus. It is a received opinion among all Ecclesiastical writers, that Antichrist will be out of the tribe of Dan. In ſaying then the Pope to be Antichrist, who is of nor such Tribe, nor otherwise Jew: is it not insolent presumption, seeing that the Pope is so wrongfully reproached, and all Ecclesiastical writers so disdainfully contradicted?
What Tribe or nation soever he shall be, S. Paul expressly warns us, that we be not terrified, neither by spirit, nor by word, nor by Epistle, for his coming before the revolt; that is the suppressing of the Roman Empire, and Emperor both for Imperial power & name. which not being hitherto done, as all the world may witness, what fools are they that are terrified without spirit, or word, or Epistle of others then blaspheming heretics, only upon lying improbabilities, yea impossibilities, affirming him to be already come, and now to continue above a thousand years?