These false converts are attention seekers. Many of these internet personalities make a living off of Catholics.

These false converts have fame and money.

What will they do next?

They will start to claim that they are favored by God with visions and private revelations. I suppose to increase their fame and wealth.

Some of these false converts will soon claim to have vision from the Mother of God and the saints.

How do I know this?

"During the time of the approach of the punishments announced at La Salette, an unlimited amount of false revelations will arise from hell like a swarm of flies;  a last attempt of Satan to choke and destroy the belief in the true revelations by false ones." Marie Julie Jahenny of La Faudais

Marie Julie Jahenny of La Faudais says once the 35+ worth of Chastisements start we will be witness to many false visionaries.

When does the 35+ worth of Chastisements start? When the Two Popes are dead.

This is foretold by Mélanie

Using the words of Mélanie and Marie Julie Jahenny we can surmise that many false converts will start to tell us that they are having visions and private revelations.

We already have four instances of this hellish nonsense.

First is from Dr Taylor Marshall who is one of the False Converts - he had a vision in the summer of 2018 and posted it on Youtube - he later took it down because he is embarrassed by it. You can still see the video here:

There is poison in the mother but her milk is pure?

“I was doing an examination of conscience before bed,” he explained, describing a common traditional Catholic practice, “and I was thinking on that point of being worried… about the Holy Catholic Church, Mother Church.

“And as I was, suddenly I saw this beautiful woman. She had blond hair, she was perfect, no wrinkles, no spots, and I immediately discerned that this was Holy Mother the Church.

“And she was writhing in pain. She was in a bed, there were sheets on her, and she was very sick. And I noticed that her breasts were engorged with milk, tons of milk. And there were babies and children crying out to her that were hungry. And she wanted to feed them, and she was upset, but she was so sick she could hardly sit up from her bed.

“And then I thought to myself, ‘Oh she’s poisoned, she doesn’t want to nurse the children because then she’ll give them the poison.’ And then there was this voice, it was like God or an angel, I don’t know, and it said, ‘No, the milk is still pure.‘

“And so I saw her there in all of her beauty, but so sick and struggling and loving those children and seeing all that milk stored up there. And I realized that the sacramental graces, the dogma, the doctrine, the morality, all of that in the Church is pure.

“So we just need to love Mother Church, and we need to be fed by Mother Church, and be patient, and know that any incorruption that enters the Church does not affect the milk flow. The nutrition that Mother Church gives us is always pure, it’s always unadulterated, we can always trust that until the end of time.

“Hope that’s a comfort to you as it was for me. God bless, bye.”

Now the next visionary is a Priest who is not a convert. 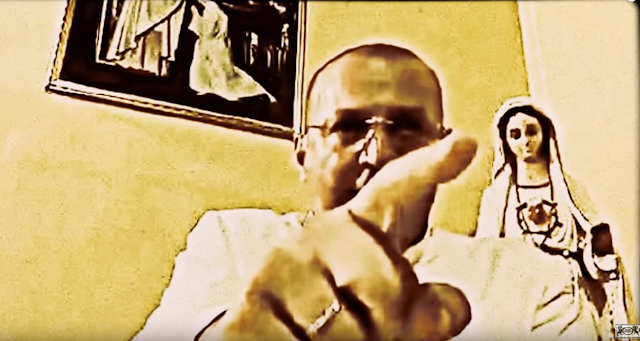 Minutella claims to have visions:

However, Minutella’s inspiration isn’t restricted to the theological classics. He also claims to receive private revelations, which initially caused the Archdiocese of Palermo to order him to silence in 2015. It didn’t really take hold, as Minutella went on to publicly accuse Pope Francis of heresy in the wake of Amoris Laetitia. In 2017 he was removed as pastor of his parish, leading to the excommunication decree a year later, at a time when Minutella was advising his followers – 43,000 on his Facebook page – not even to enter churches where pastors remain loyal to Francis, in order to avoid doubts about the validity of the sacraments. To those who object that they don’t have access to priests such as Minutella but still want to go to Mass, he’s unyielding. “The Mass is very important, but it’s even more important to conserve the faith in its integrity,” he said. Source

Minutella claims to have visions or private revelations to increase the number of his followers.

This is what Minutella says about the Blessed Sacrament of the Mass:

The are many American Trads who are fans of Minutella. Those Rad Trads who follow Ann Barnhardt are smitten with Minutella.

Another false convert that has visions and sees things is Alexander Tschuggel who claims on one of Dr Taylor Marshall youtube videos that he has been given a private revelations from God and that God has given him a very big task:

"God has given me a a very big, big, big task to do that will change the whole face of the world!!!!" Alexander Tschuggel

I kid you not.

March 31, 2020 WHAT IS THE VERY VERY VERY VERY BIG TASK THAT GOD WILL GIVE TO THE FORERUNNER OF THE ANTICHRIST ALEXANDER TSCHUGGUEL? PROHIBIT COMMERCIAL FLIGHTS ABOVE 29,050 FEET? DECLARE HIMSELF HOLY ROMAN EMPEROR? OR HUNT DOWN PRIESTS AND MAKE THEM DIE A CRUEL DEATH? FORM A NATIONALIST ARMY

False convert Alexander announced this mission from God in March 2020...and we have not heard from him since.

May 26, 2020 OH HERE WE GO...DR TAYLOR MARSHALL CLAIMS THAT ALEXANDER TSCHUGGUEL IS THE GREAT MONARCH!

And the fourth visionary is not a false convert per se but he is a product of the Legionaries of Christ.  He is a hater of La Salette. His name is Steve Skojec and he was first of the Rad Trads to claim of having visions. He did this in September of 2016. When he posted on One Peter Five.

TWO SYMBOLIC LOSSES IN THE WAR FOR SOULS

That prophetic post was taken down immediately but I did capture some of the comments about the post: 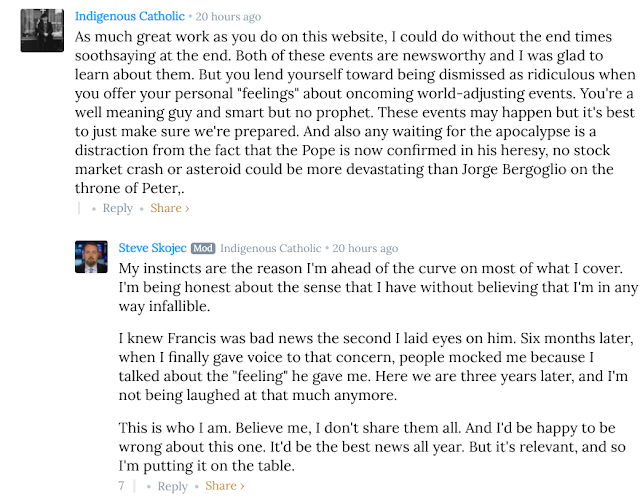 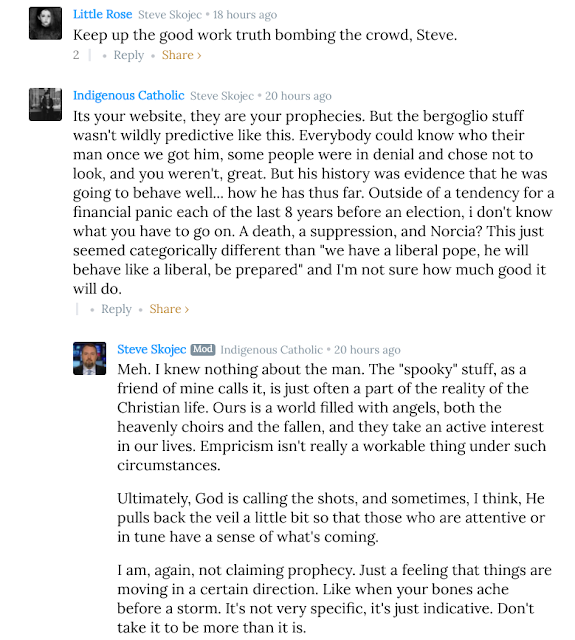 So again as Marie Julie Jahenny of La Faudais has said there will be Rad Trads who claim to visions/private revelations as we get closer to La Salette's 35 + years worth of Chastisements:

"During the time of the approach of the punishments announced at La Salette, an unlimited amount of false revelations will arise from hell like a swarm of flies; a last attempt of Satan to choke and destroy the belief in the true revelations by false ones."

We should start to read and hear more from these Rad Trad visionaries....