Evangelical Protestant Doctrine Conforms To The Koran Of Muhammad 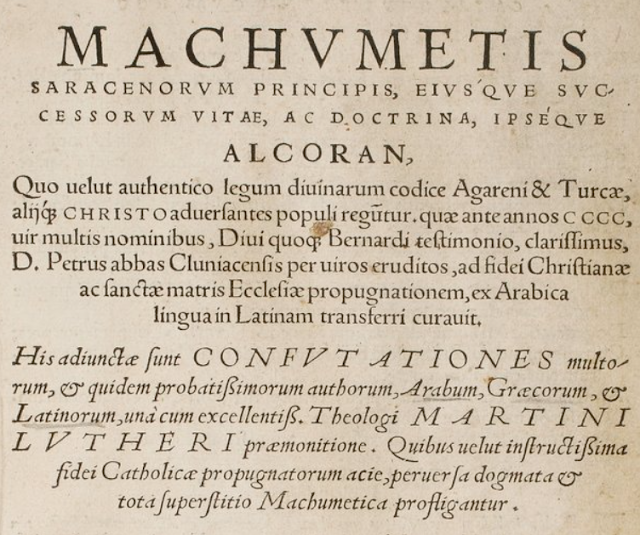 Preface of Martin Luther of Bibliander's translation of the Qu'ran in Latin. Source
Rad Trad Influencers and their Rad Trad followers have no problem locking arm and arm with Protestant Evangelicals in political and economic matters. Call it political Ecumenism.
How can Rad Trad Influencers and their Rad Trad followers defeat Islam by aligning with Protestant Evangelicals who have the same beliefs that are found in the Koran?
This is the main reason why political Ecumenism is bound to fail.
I tend to think that the reason why Rad Trad Influencers and their Rad Trad followers are so easily attracted and willing to align with Evangelical Protestantism is due to Rad Trad love of sensuality. Most Rad Trad Influencers and their Rad Trad followers are addicted to the pleasures of the Marital Bed. Muslims and Evangelical Protestants are carnal to a fault, Rad Trad Influencers and their Rad Trad followers know this about Islam and follow the example of Muslims and Evangelical Protestants in sensual pleasures found in the embraces of their wives.
When was the last time Rad Trad Influencers and their Rad Trad followers took up the challenge of abstaining from the pleasures of the Martial Bed for the season of Advent? No embraces in the arms of your wife for a whole month? Impossible. Rad Trad Influencers and their Rad Trad followers refuses to abstain from the pleasures of a wife's embrace.
I think this is why Rad Trad Influencers and their Rad Trad followers are always attacking the clergy - its called virtue signaling
vir·tue sig·nal·ing noun the action or practice of publicly expressing opinions or sentiments intended to demonstrate one's good character or the moral correctness of one's position on a particular issue.
Attack the homo clergy all the while engaging in nightly Marital bliss.....
Here are a list of Evangelical Protestant beliefs that are found in the Koran
1, The Koran maketh esteem of the liberty of the flesh; you preach the same freely, which is the gain of nature.
2. The Koran despises miracles because Mahomet could make none; yours also say there are no more miracles in the Church because those of your pretended reform could never make any.
3.  Muslims abhor the ceremonies of the Catholic Church, you also detest them.
4.  Muslims hate the cross, & you also.
5. Muslims have no images in their mosque; neither have you in your temples
6. Muslim make little account of Jesus, for they esteem him but a prophet & servant of God, as did the Arians: Calvin doth the same & do scoff the answers of the ancient fathers given in favor of the Catholic Faith against the Arians: whosoever will make well Calvin's doctrine, he may see in divers places, the faith of the Arains, Turks, & not of the Christians; yea by Calvin's doctrine it hath been noted that divers in Poland, in Transylvania & in Hungary became Arains, Turks, Atheists, as witness Andrew Tubing.
7. But the chiefest agreement between you & Muslims consisteth in the Hatred of the Pope, for Muslims always are sworn enemies of the Vicar of Christ, & they still make open war against him; you are greater enemies then they against the Pope: what marvel  is it then that Luther & yours do so affect the Turk, rejoicing at his prosperity & grieving at his loss?
8. Behold Luther's words, after having vomited cruel injuries against Catholic Princes, calling them mad, furious, beasts & men without judgment & eyes saith: We do not obey to those fellows in any wise, either for going to the war or to contribute any thing against the Turk, the Turk is ten times better & more wise then the Princes; what prosperity can any one hope with these fools?
9. Melancthon Luther's disciple giveth further increase saying: if the Magistrate command anything against divine law, beware thyself to obey but resist as much as thou maiest, for example, if is command to make war against the Turk: so according this abuser, to make war against the Turk is to do against divine law, the same is the style of Puritans who never preach against the Turk, neither to make war against him, but rather against the Pope & Priests, that is, against Jesus & his Church.
10. Consider now how the doctrine of your pretended reform hath miserably perverted your spirits, causing you to make affectionate alliance with the Turk the greatest enemy of Jesus & of the Catholic Faith, who liveth upon earth; & causing you to hate the most just & most honorable war (I mean against the Turk) which may be done in this world by Christians: for it is to recover the countries & the patrimony of the children of God from the hands of a cruel Tyrant the Turk who have invaded them by treason & force, & who holds them against all right; & it is for the argumentation of the Christian faith & for the glory of God; it is also for the salvation of an infinite number of men who are captives in body & soul; yea it is to plant the glorious cross in the countries (which in old time were sanctified by the holy steps, blood marvels of Christ & of his servants) which this Pharaoh the Turk hath profaned & defiled: behold how your spirits are aliened from the noble generosity of our Ancestors Christians who in times past esteemed it most blessed to cross the seas & to employ their goods & lives for to fight against this Barbarian the true forerunner of the Antichrist: you to the contrary not only you will not make war against the Turk to the imitation of our Ancestors, but also you put forth public maxims to favor of the Turk & you hinder Christians as much as you may to make the war of our Lord & to augment his glory, & you believe it is against the divine law to fight against the enemy of God & his son Jesus; yet you are so bold to say that by your religion you glorify God.
I.B.C.
1625