DEMONOLATRY BK.I. CH.I. The Inducements By Which Men May First Be Led Astray By Demons, And So Falling Become Dealers In Magic 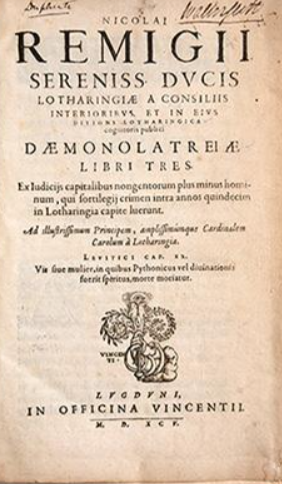 DEMONOLATRY
NICOLAS REMY
1595
BOOK I
CHAPTER I
The Inducements by which Men may first be led astray by Demons, and so falling become Dealers in Magic.
EXPERIENCE itself, to our own great loss and bane, affords us sad proof that Satan seizes as many opportunities of deceiving and destroying mankind as there are different moods and affections natural to the human character. For such as are given over to their lusts and to love he wins by offering them the hope of gaining their desires: or if they are bowed under the load of daily poverty, he allures them by some large and ample promise of riches: or he tempts them by showing them the means of avenging themselves when they have been angered by some injury or hurt received: in short, by whatever other corruption or luxury they have been depraved, he draws them into his power and holds them as it were bound to him. But it is not our purpose to discuss here what are those blind passions and desires by which men may be led into sin; for it would be a waste of time and an abuse of learning to involve ourselves in the much-worn controversy between Prometheus and Epimetheus, reason and appetite. That we pass by, and say that Satan assails mankind not only through their secret and domestic affections and (if I may so express it) by burrowing into their very hearts, but also openly and in declared warfare, as it is called. For he openly addresses them by word of mouth, and appears in visible person to converse with them, as he did when he contended with the Saviour in the wilderness (S. Matthew iv). But this he does the more easily when he finds a man weakened by the hardships and cares of life; for then he suggests to the man that he is grieved at his misfortunes and is willing to come to help him. But not even so can he aid and assist any man unless that man has broken his baptismal pledge and agreed to transfer his allegiance to him and acknowledge him as his Master. But if he cannot gain his object in this way by mere persuasion, then Satan employs those allurements and temptations which I have already mentioned: he fabricates some fair and delectable body and offers it for a man’s enjoyment: or he can do much by means of a false display of riches: or by providing drugs to poison those upon whom a man wishes to be avenged, or to heal those to whom a man owes a debt of gratitude: often, indeed, the Demons forcibly drive and compel men into compliance by fierce threats and revilings, or by the fear of the lash or peace For men may just as easily be led by violence to practise sorcery as by coaxing and blandishment, though I shall not here adduce examples to substantiate this statement, since this matter will be considered more fully in its due place: for the present I am content to say that I have found it to be the rarer case for a sorcerer to be driven by force into his abominable practices.
The truth is that, when Satan cannot move a man by fair words, he compels him by fear and threats of danger. When Claude Moréle, who was convicted of witchcraft at Serre (5th Dec., 1586), was asked what was the chief inducement that had first led him to give himself to the Demon, he answered that he had withstood the temptation of all the Demon’s fair words, and had only yielded when Satan had threatened to kill his wife and children. At Guermingen, 19th Dec., 1589, Antoine Welch no longer dared to oppose the Demon in anything after he had threatened to twist his neck unless he obeyed his commands, for he seemed on the very point of fulfilling his threat. At Harécourt, 10th Nov., 1586, when he could by no promises persuade Alexée Driget to dedicate herself to him, thé Demon at last threatened to destroy the house in which she lived: and this misfortune indeed befell her not long afterwards; but it will be more convenient to discuss elsewhere whether he was the actual cause of it, or whether he merely foresaw that it would happen. Certainly there are many examples in the pagan histories of houses being cast down, the destruction of the crops, chasms in the earth, fiery blasts and other such disastrous tempests stirred up by Demons for the destruction of men bor no other purpose than to bind their minds to the observance of some new cult and to establish their mastery more and more firmly over them.