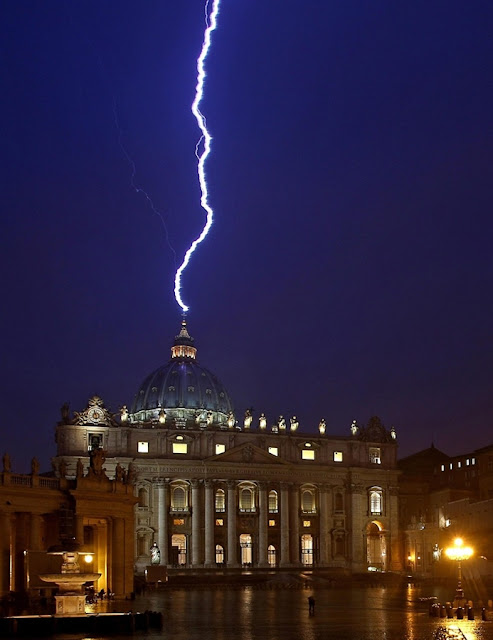 Evil Omen Turned Out To Be True


Majority now believe that the lightning strike that hit St Peter's Basilica as Pope Benedict was an evil omen or portent. The Pontificate of Francis gives truth to this observation.

Another sign of sorts occurred when Gary was interviewed by WDIV a loud thunder clap was heard overhead.

Comments on the thunder clap from some of the followers of Gary:

KvalleyVET • 2 days ago I couldn't resist and had to look it up. According to this, that rain and thunderstorm was very random considering the weather history of Detroit for that week and the days following. The weather had a "low point" on the 25 from six to midnight. http://www.timeanddate.com/wea... No rain all week then on the evening of the 25 it rains and thunderstorms and then back to sun.

Steve Derby • 2 days ago Rebel without a cause. They keep regurgitating the ' Freedom of religion' tagline. Webster defines it as... 'The right, guaranteed by the First Amendment to the United States Constitution, to choose religious practices or to abstain from any without government intervention.' At what point, in the lives of any of these people, did they NOT have this right? And if one must join a Satanic cult to secure this 'freedom', how can it be free? What these people are really looking for is acceptance for questionable morale behavior. If their goal was a noble one, it would be embraced by entire families, all age groups would be present, and it would be supported by Christian religions, not opposed by them. Freedom fighters throughout this country's history have NEVER gathered under Satan's banner. As others have said, It's pretty clear that these folks don't realize the gravity of their situation. The thunderclap underscoring Michael's message should not go unnoticed!

Avatar Pennell • 19 hours ago It is very interesting the loud thunder noise that took place when Michael Voris said, "I feel sorry for them" during the interview; listen at minute 1:34. It is also very eerie the dark "end of the world" clouds as I call them hovering over the cult church while the news was filming this unfortunate event.

Most of Gary's followers take this thunder clap as a sign from Heaven bestowing blessing on the work of Gary.....

Really....the Blessed Trinity is gonna the bless the work of a man who ignores the heresies of wicked Pope Francis?

Why would God bless a man who refuses to use the gift that he has been given to protect and defend Holy Mother Church from the machinations of Pope Francis the destroyer?

This thunder clap is an evil portent.