Michael Voris Is Mentioned By The Mother Of God At La Salette & Fatima!!!

Gary The Forerunner To The Antichrist

Look, none of you believe in a forerunner to the Antichrist. None. If any of you did then I certainly would have come across it, but I haven't.

Who is the forerunner to the Antichrist? Is he alive today?

At one time I thought that the Norway Mass Murderer Anders Behring Brievik was the forerunner to the Antichrist. But ABB is not a Roman Catholic, he may convert. ABB is incarcerated for another 15 years or so - he just may get an early release.

The reason for this blog is combat the error that many believe - that there is no forerunner to the Antichrist and the actual Antichrist is soon at hand. Those who believe in the Actual Antichrist manifesting himself soon are mostly protestant and worldly Catholics who are too lazy to look into the matter.

Our Lady at La Salette does not mention who the forerunner will murder, but she does mention who will be martyred in her message at Fatima: the bishop dressed in white:

Who is the leader of the soldiers who will kill the Fatima Pope? The one in shades: 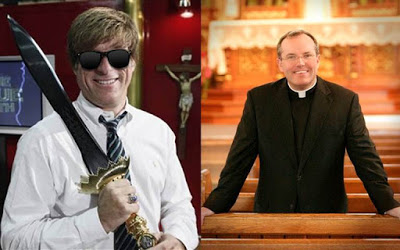 Gary The Forerunner to The Antichrist & Spiritual Director


Why pick on Voris?

Can you name another soul who has such vitriolic hatred toward the SSPX as Michael Voris does?

Can you name another soul who so fanatically idolizes Pope Francis as to give the Pope some God like status?

On the one hand Voris verbally attacks and condemns men who are faithful to the Catholic Faith and on the other hand worships wicked and heretical Pope Francis. Can you not see how insane that is?
Completely insane.

Look, this is serious business. There is a forerunner to the Antichrist and he is probably alive today. It is the duty of any faithful Catholic to be on guard of such a one as the forerunner to the Antichrist. This man must be identified ahead of time before his public manifestation, because his public manifestation, I am afraid, will not be until he murders the Fatima Pope and faithful.

So call this a heads up.

If any one has a better candidate in mind please by all means share.

As for Gary, I still think that one day he will embarrass himself in idolizing wicked Pope Francis all the while attacking just about every Bishop and Cardinal out there. His embarrassment will come about after Pope Francis dies and another is elected in his place as Francis II - this second Francis will most likely be one of Voris' current targets. Many will mock Voris and ask him if he will now attack Francis II since he attacked him before he was elected pope.

Still Voris will gain power, a wicked power, a power given to him by Satan. The meaning behind the above photo of shade wearing Voris.......