But Who Is FELSENBURG?......But Who Is TSCHUGGUEL?

In Lord of the World - Felsenburgh is the Antichrist

Reading the Lord of the World we find this about Felsenburgh:

BOOK I-THE ADVENT CHAPTER I I

"I don't understand in the least," she said. "Who is Felsenburgh, after all?"

"My dear child, that is what all the world is asking. Nothing is known except that he was included in the American deputation at the last moment. The Herald published his life last week; but it has been contradicted. It is certain that he is quite a young man, and that he has been quite obscure until now."

"Well, he is not obscure now," observed the girl.

"I know; it seems as if he were running the whole thing. One never hears a word of the others. It's lucky he's on the right side."

"And what do you think?"

Oliver turned vacant eyes again out of the window.

"I think it is touch and go," he said. "The only remarkable thing is that here hardly anybody seems to realise it. It's too big for the imagination, I suppose. There is no doubt that the East has been preparing for a descent on Europe for these last five years. They have only been checked by America; and this is one last attempt to stop them. But why Felsenburgh should come to the front—-" he broke off. "He must be a good linguist, at any rate. This is at least the fifth crowd he has addressed; perhaps he is just the American interpreter. Christ! I wonder who he is."

"Has he any other name?"

"Julian, I believe. One message said so."

BOOK I-THE ADVENT CHAPTER I I I

„But who is Felsenburgh?“ put in a young priest.

Monsignor pursed his lips and shook his head. He was one of those humble persons as proud of ignorance as others of knowledge. He boasted that he never read the papers nor any book except those that had received the imprimatur; it was a priest’s business, he often remarked, to preserve the faith, not to acquire worldly knowledge. Percy had occasionally rather envied his point of view.

„He’s a mystery,“ said another priest, Father Blackmore; „but he seems to be causing great excitement. They were selling his `Life’ to-day on the Embankment.“

„I met an American senator,“ put in Percy, „three days ago, who told me that even there they know nothing of him, except his extraordinary eloquence. He only appeared last year, and seems to have carried everything before him by quite unusual methods. He is a great linguist, too. That is why they took him to Irkutsk.“ Lord Of The World  Robert Hugh Benson

You can substitute Tschuggel for Felsenburgh  and you start to see the similarities.

Our Lady of La Salette said that there will be a Forerunner to the Antichrist:

One has to wonder about the self proclaimed La Salette expert - Dr. Taylor Marhsall - does he believe that there will be a Forerunner to the Antichrist?

Did Dr. Taylor Marhsall just want to make a quick buck off of the La Salette Message and deflect from the manifestation of the Forerunner to the Antichrist - Tschuggel?

See? Tschuggel can't be the Forerunner to the Antichrist because I'm standing right next to him at the gun range...

The Mystery of Iniquity worketh... 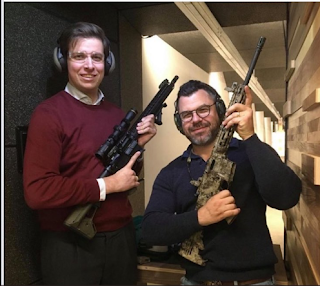