What's Worse For The Catholic Church: A Dumb Pagan Wooden Idol Or The Irreverence And Impiety Of The Priests In Celebrating The Holy Sacrifice Of The Mass?

“Everywhere there will be extraordinary wonders, as true faith has faded and false light brightens the people. Woe to the Princes of the Church who think only of piling riches upon riches to protect their authority and dominate with pride. Our Lady of La Salette 19 Sept. 1846 (Published by Mélanie 1879)

People will think of nothing but amusement. The wicked will give themselves over to all kinds of sin. Our Lady of La Salette 19 Sept. 1846 (Published by Mélanie 1879)

The priests, ministers of my Son, the priests, by their wicked lives, by their irreverence and their impiety in the celebration of the holy mysteries, by their love of money, their love of honors and pleasures, and the priests have become cesspools of impurity. Yes, the priests are asking vengeance, and vengeance is hanging over their heads. Woe to the priests and to those dedicated to God who by their unfaithfulness and their wicked lives are crucifying my Son again! The sins of those dedicated to God cry out towards Heaven and call for vengeance, and now vengeance is at their door, for there is no one left to beg mercy and forgiveness for the people. There are no more generous souls; there is no one left worthy of offering a stainless sacrifice to the Eternal for the sake of the world. Our Lady of La Salette 19 Sept. 1846 (Published by Mélanie 1879)

“Woe to the inhabitants of the earth! God will exhaust His wrath upon them and no one will be able to escape so many afflictions together. Our Lady of La Salette 19 Sept. 1846 (Published by Mélanie 1879)

“The chiefs, the leaders of the people of God have neglected prayer and penance, and the devil has bedimmed their intelligence. They have become wandering stars which the old devil will drag along with his tail to make them perish. God will allow the old serpent to cause divisions among those who reign in every society and in every family. Physical and moral agonies will be suffered. God will abandon mankind to itself and will send punishments which will follow one after the other for more than thirty-five years. Our Lady of La Salette 19 Sept. 1846 (Published by Mélanie 1879)

“The Society of men is on the eve of the most terrible scourges and of gravest events. Mankind must expect to be ruled with an iron rod and to drink from the chalice of the wrath of God. Our Lady of La Salette 19 Sept. 1846 (Published by Mélanie 1879) 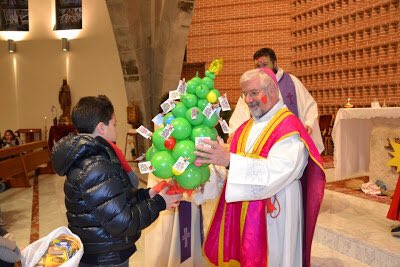 The Irreverence and Impiety of the Priests has been going on for well over fifty years.

A Dumb Pagan Idol was inside a Catholic Church for a few days.

A few days until Alexander Tschuggel decided to pick up the Dumb Pagan Idol and carry it over to the Tiber River to dump it in the water.

Did this Dumb Pagan Idol put up any fight?

Did the "brave knight" wrestle with the dumb Pagan Idol?

Did the "brave catholic hero" have to subdue the Dumb Pagan Idol?

Did the "Great Monarch" have to throw any punches?

It was an easy task for to Alexander Tschuggel steal away the Pagan Idol.

To restore order to the Holy Sacrifice of the Mass by abolishing the New Mass?

To stop the Irreverence and Impiety of the Priests who celebrate the New Mass?

Or throw a stolen wooden object into the river?