The Holy Father passed through a big city half in ruins and half trembling with halting step, afflicted with pain and sorrow, he prayed for the souls of the corpses he met on his way; having reached the top of the mountain, on his knees at the foot of the big Cross he was killed by a group of soldiers who fired bullets and arrows at him, and in the same way there died one after another the other Bishops, Priests, men and women Religious, and various lay people of different ranks and positions. Beneath the two arms of the Cross there were two Angels each with a crystal aspersorium in his hand, in which they gathered up the blood of the Martyrs and with it sprinkled the souls that were making their way to God. The third part of the secret revealed at the Cova da Iria-Fatima, on 13 July 1917. 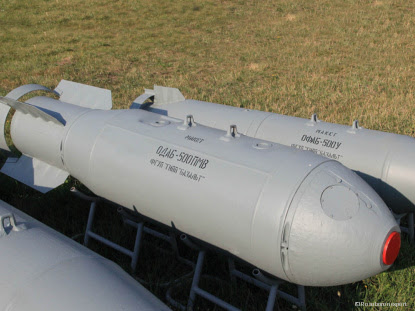 "The blast kill mechanism against living targets is unique–and unpleasant. ... What kills is the pressure wave, and more importantly, the subsequent rarefaction [vacuum], which ruptures the lungs. ... If the fuel deflagrates but does not detonate, victims will be severely burned and will probably also inhale the burning fuel. Since the most common FAE fuels, ethylene oxide and propylene oxide, are highly toxic, undetonated FAE should prove as lethal to personnel caught within the cloud as most chemical agents." DIA

"The effect of an FAE explosion within confined spaces is immense. Those near the ignition point are obliterated. Those at the fringe are likely to suffer many internal, and thus invisible injuries, including burst eardrums and crushed inner ear organs, severe concussions, ruptured lungs and internal organs, and possibly blindness." Another Defense Intelligence Agency document speculates that because the "shock and pressure waves cause minimal damage to brain tissue ... it is possible that victims of FAEs are not rendered unconscious by the blast, but instead suffer for several seconds or minutes while they suffocate". CIA

Where's this big city half in ruins?

What causes the big city to become half in ruins?

The timing of the Earthquake or Nuclear Missile or  Thermobaric Bomb has to be during a meeting of hundreds of Bishops, Cardinals, Priests who are called to Rome for some event. (Pope Benedict's Funeral, Synod etc)

Thermobaric Bomb can be dropped from a plane or helicopter: