Farrakhan: 'I am the Messiah' 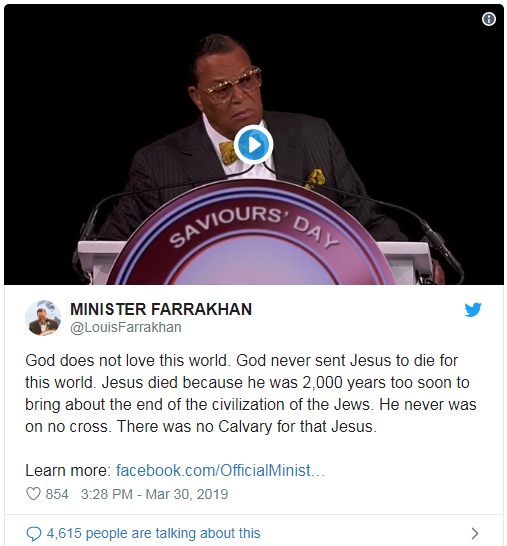 Farrakhan claims to be Jesus in 'Saviours' Day' address: 'I am the Messiah'

Nation of Islam leader Louis Farrakhan, who has reportedly led a chant of "death to America" and recently called for a separate state for black Americans, has made more controversial comments, claiming to be Jesus and clarifying his "anti-termite" statement. Farrakhan made many shocking claims during NOI's Saviours' Day keynote address in February at the United Center arena in Chicago. He told Rep. Ilhan Omar "you have nothing to apologize for," and he praised her fellow colleague freshman, Rep. Alexandria Ocasio-Cortez. The preacher of Islam then appeared to mock one of the most famous passages from the Bible, John 3:16: "God does not love this world. God never sent Jesus to die for this world. Jesus died because he was 2,000 years too soon to bring about the end of the civilization of the Jews. He never was on a cross, there was no Calvary for that Jesus," Farrakhan said. Instead, he said, Jesus's name would live until the one that came that he was prefigured for. Source