Athanasius Schneider Versus Fr. Paul Nicholson On The SSPX LOL!!! 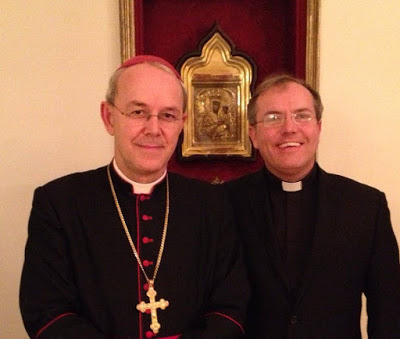 Adelante la Fe: Your Excellence has recently visited the SSPX [seminaries] in the United States and France. We know it was a “discreet” meeting but, can you make an evaluation for us of what you saw and talked with them about? What expectations do you have of a coming reconciliation and which would be the main obstacle for it?

Mons. Schneider: The Holy See asked me to visit the two [seminaries] of the SSPX in order to conduct a discussion on a specific theological topic with a group of theologians of the SSPX and with His Excellency Bishop Fellay. For me this fact shows that for the Holy See the SSSPX is not a negligible ecclesiastical reality and that it has to be taken seriously. I am keeping a good impression of my visits. I could observe a sound theological, spiritual and human reality in the two [seminaries]. The “sentire cum ecclesia” of the SSPX is shown by the fact that I was received as an envoy of the Holy See with true respect and with cordiality. Furthermore, I was glad to see in both places in the entrance area a photo of Pope Francis, the reigning Pontiff. In the sacristies there were plates with the name of Pope Francis and the local diocesan bishop. I was moved to assist the traditional chant for the Pope (“Oremus pro pontifice nostro Francisco…”) during the solemn exposition of the Blessed Sacrament.

To my knowledge there are no weighty reasons in order to deny the clergy and faithful of the SSPX the official canonical recognition, meanwhile they should be accepted as they are. This was indeed Archbishop Lefebvre’s petition to the Holy See: “Accept us as we are”.

I think the issue of Vatican II should not be taken as the “conditio sine qua non”, since it was an assembly with primarily pastoral aims and characteristics. A part of the conciliar statements reflects only its time and possesses a temporary value, as disciplinary and pastoral documents do. When we look in a two millennia old perspective of the Church, we can state, that there is on both sides (Holy See and the SSPX) an over-evaluation and over-estimation of a pastoral reality in the Church, which is Vatican II.

When the SSPX believes, worship and conducts a moral [life] as it was demanded and recognized by the Supreme Magisterium and was observed universally in the Church during a centuries long period and when the SSPX recognizes the legitimacy of the Pope and the diocesan bishops and prays for them publicly and recognizes also the validity of the sacraments according to the editio typica of the new liturgical books, this should suffice for a canonical recognition of the SSPX on behalf of the Holy See. Otherwise the often repeated pastoral and ecumenical openness in the Church of our days will manifestly lose its credibility and the history will one day reproach to the ecclesiastical authorities of our days that they have “laid on the brothers greater burden than required” (cf. Acts 15:28), which is contrary to the pastoral method of the Apostles.