Michael Voris Should Challenge The SSPX Face To Face On A Mic'd Up Episode.... 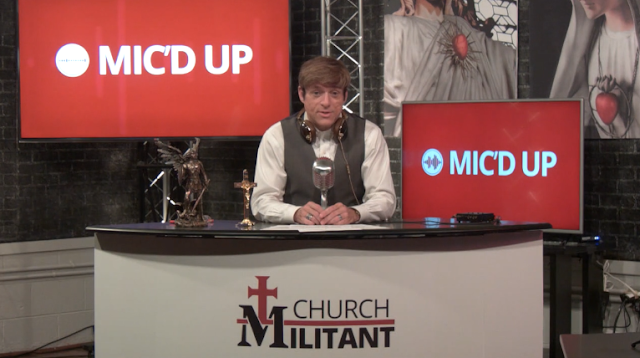 Gary
The Forerunner To The Antichrist

Why not debate face to face?

Just think the SSPX & Voris face off on Mic'd up.

Louie thinks that CMTV viewers would like to see a face to face debate:

In any case, those of you who are regular CMTV viewers and/or subscribers, tell me:

How interested would you be in watching Michael Voris interview a priest of the SSPX, live on air, for an hour or more?

I’m not talking about a cat fight here, but rather a straight forward, no holds barred, yet charitable, face to face conversation ordered toward discovering the truth and defending the faith.

I can’t speak for the Society, but knowing some of their priests as I do, I would venture to say that the only thing that they would ask in return is for a real opportunity to speak.

If so, let Michael Voris know just how interested you are in that program. He may not accede to your wishes, but at the very least you’ll learn a thing or two about his make-up and his motives.

Remember who we’re talking about here:

This is the same Michael Voris who boldly challenged Cardinal Dolan face to face, without any fear that putting His Buffoonery on camera to answer for his behavior in his own words, in spite of his considerable charisma and stage presence, would somehow endanger the souls of impressionable viewers.

So don’t let him make that lame excuse for not challenging the SSPX face to face as, clearly, that dog won’t hunt.

At this, I ask your forgiveness… This rather general reaction to Voris’ latest anti-Society rant has gone a bit longer than expected, so much so that I will save more specific commentary relative to the points and counterpoints raised by both the Society and by Voris as it concerns the Novus Ordo for another post. Harvesting The Fruit Read More>>>>>>