How Is Gary The Forerunner To The Antichrist Going To Explain This? Its Official! Pope Francis Declares Divorced And Remarried People Not Excommunicated Can Received COMMUNION!! 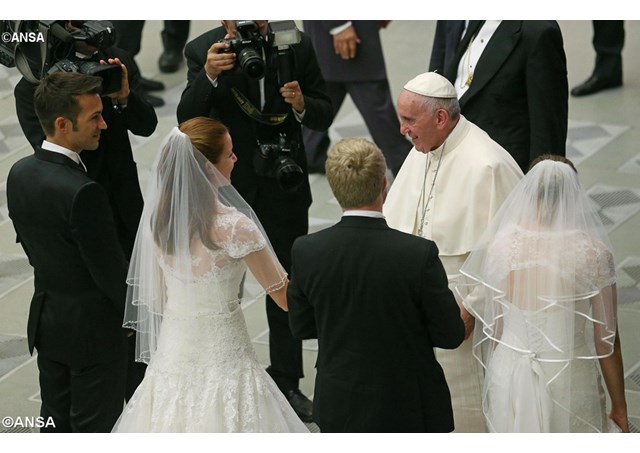 (Vatican Radio) Pope Francis resumed his General Audiences on Wednesday, following the summer holiday. In his catechesis, the Holy Father continued his teaching on the family, reflecting on the situation of those who have divorced and entered into a second union.

“The Church knows well,” he said, “that such a situation contradicts the Christian Sacrament.” However, he continued, the Church, as a Mother, always seeks the good and salvation of all her children. The Pope said it is important for the Church to foster a true welcome for these families in our communities. The Church must always show her pastoral care for those in such situations, especially the children.

Pope Francis noted that the Church in recent decades has developed a greater awareness of the need to be welcoming toward the divorced and re-married. He emphasized that they are still part of the Church – they are not excommunicated, and should not be treated as such, but rather must be encouraged, with their families, to participate in the Church’s life: through prayer, listening to the Word of God, the Christian education of their children, and service to the poor. He pointed to the words of Pope Benedict XVI, who called for careful discernment and wise pastoral accompaniment, while recognizing that there are no “simple solutions” to the difficulties wounded families face.

The Church, Pope Francis said, should imitate the Good Shepherd, welcoming all her children as a mother who is willing to give her life for them. “Each one of us can do our part by having the attitude of the Good Shepherd, Who knows every one of His sheep, and excludes no one from His infinite love."

Several will abandon the faith, and a great number of priests and members of religious orders will break away from the true religion; among these people there will even be bishops. Our Lady of La Salette 19 Sept. 1846 (Published by Mélanie 1879)